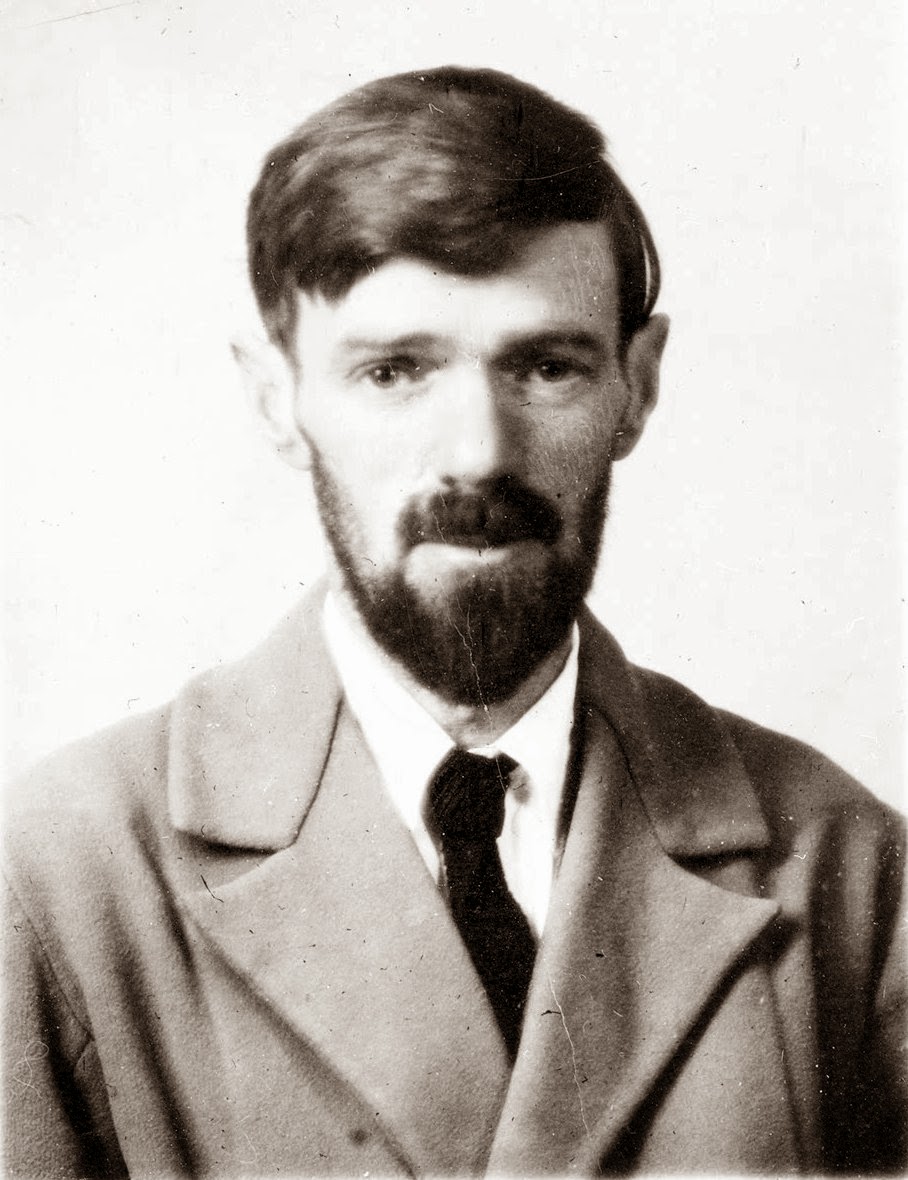 6.
a)Why does the poet decide to stand and wait till the snake has finished drinking? What does this tell you about the poet ? (Notice that he uses ‘someone’ Instead of  ‘Something’ for the snake )

Answer-Owing to the
prodigious presence of the snake at the water through, the poet had to show
civility. Thirsty in the extreme hot weather, the poet was awestruck coming to
the water trough as there was the godly presence of the snake.
This reveals that the poet was of an accommodating and
sympathetic nature.
b)In stanza 2 and 3 , the poet gives a vivid description of the snake by using suggestive expressions .What picture of the snake do you form on the basis on the basis  of this description ?
Answer- The snake consisted
with yellow brown belly trailed over the edge of the stone trough. He rested
his throat upon the stone bottom and rested upon the stone bottom and sipped
the water into his slack long body. After drinking water he raised his head
just like cattle do and flashed his forked tongue.
c) How does the poet describe the day and the atmosphere when he saw the snake ?

Answer-Scorching was the
heat in the hot summer day. Death still was the atmosphere without a bit of
movement in the air. The poet was standing under the shade of the strange
scented carob tree. 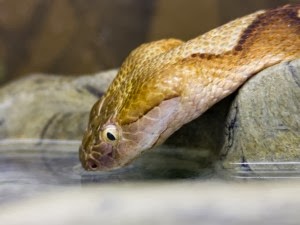 d) What does the poet want to convey by saying that the snake emerges from the  ‘burning bowels  of the earth ‘ ?
Answer-The dwelling place of
a snake is at the bottom of the earth. It encompasses through the hole of earth
and rests there. The bottom of the earth is equated with burning bowl. Besides,
it denotes the hot summer weather situation of the place.
e) Do you think the snake was conscious of the poet’s presence ? How do you know ?
Answer- Irrefutable is the
cold fact that the snake was heedlessly aware about the presence of the writer.

The snake was fully au courant of his presence. He lifted
his head and like a god and had a vaguely look. Though seemed like the act of
drinking cattle, the snake presented extreme form of ignorance.
f) How do we know that the snake’s thirst was satiated ? Pick out the expressions that convey this ?
Answer- The following
expressions suggest that the snake was satiated to the utmost:-
i) “He sipped with his
straight mouth, softly drank through his straight gums, into his slack long
body silently
ii) And stooped and drank a
little more. 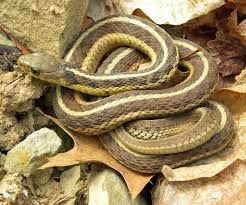 g)The poet has a dual attitude towards the snake .Why does he experience conflicting emotions on seeing the snake ?
Answer -The influence of
education and civilization which shaped his thought process had put him in dual
conflicting emotions. His rational sensibility prompted him to curb down the
venomous threat. On the contrary he is equally amazed by the gracious presence
of the guest at his trough to drink water. This conflicting emotion unnerved
him and he hurled a log at the snake.


h)The poet is filled with horror and protest when the snake prepares to retreat and bury itself in the ‘horrid black ‘ , ‘dreadful’ hole.In the light of this statement, bring out the the irony of his act of throwing a log at the snake.
Answer- Instinctively, the
poet becomes fanatic of the snake and treats him like a guest and feels
honoured that he has made his gracious visitation on the cue of drinking water.
So he protests when the snake was about to withdraw into his hole.


But rationally he thinks that he should kill the snake.
He throws a log but immediately regrets his mean action. The irony lies in the
fact that he likes the snake, treats him like a guest yet tries to kill him.
i)         The poet seems to be full of admiration and respect for the snake .He almost regards him like a mejestic God.Pick out at least four expressions from the poem that reflect these emotions .
Answer- i) But must I
confess how I liked him.
ii) How glad I was he had come like a guest.
iii) And looked around like a god.
iv) One of the lords of life.
j) What is the difference between the snake’s movement at the beginning of the poem and later when the poet strikes it with a log of wood ? You may use relevant vocabulary from the poem to highlight the difference .
Answer- Pole asunder was the
mobility of the snake at the beginning in comparison to the ending. We get
lackadaisical movement of the snake when he comes to the trough to quench his
thirst. Later, when the poet, moved by the voice of education throws a log, the
snake twisted in velocity and with great alacrity  vanished into the hole.
k) The poet experiences feelings of self derision, guilt and regret after hitting the snake.Pick out expressions that suggest this.Why does he feel like this ?
Answer- i) And immediately I
regretted it.
2) I thought how paltry, how
vulgar, what a mean act!
3) I despised myself.
He is having the pricking of conscience for he tried to
kill the snake
l) You have recently read Coleridge’s poem The Ancient  Mariner in which an albatross is killed by the mariner .Why does the poet make an allusion to the albatross ?
Answer –  The poet brought a comparison with an event of the celebrated poem of S.T.
Coleridge Rime of the ancient mariner’ to similarise his act with the snake. In Coleridge’s poem the mariner had killed the bird for shallow reason and longed
for its return. In this poem too the poet had tried to do harm to snake without
proper reason and longed for its return from the underworld.
m) ‘ I have something to explain’– Explain.
Answer -The poet was guilt
ridden as, like a nincompoop he hurled a log of wood to kill the snake. And to
atone for the meanness of this heinous act he uttered the last line. We get
here end of his duality and taking the positive part of considering the snake
as a king god.
ADDITONAL QUESTIONS AND ANSWERS
1. Where did the
snake go and why?
Ans:- Due to the scorching
heat of the sun, the snake was thirsty and arrived in his elegant style to the
water-trough of the poet. He drank water quenched thirst and sneaked back in
the earth fissure.
2. How did the
snake quench his thirst?
Ans:- With his long slack
body the snake rested his throat on the stone bottom and sipped water with his
straight gum. Then he lifted his head like the cattle and looked unseeing like
a God. Then again he drank water like the cattle. Peaceful, pacified and
thankless the snake went back to the horred black hole. 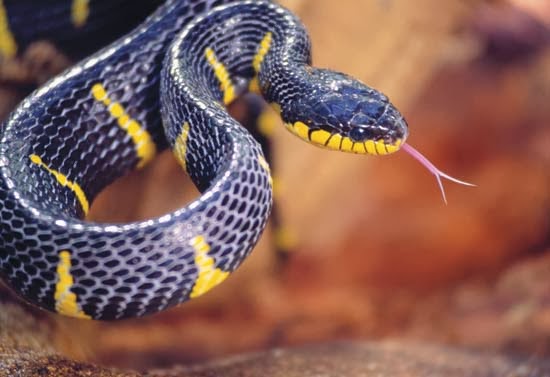 If the answers or the article helped
you and you liked the site, please support us to avail you more quality study
materials and solutions .Donate us to support us.
You may also like-

TEXTBOOK ANSWERS OF THE RIME OF ANCIENT MARINER –PART-I;