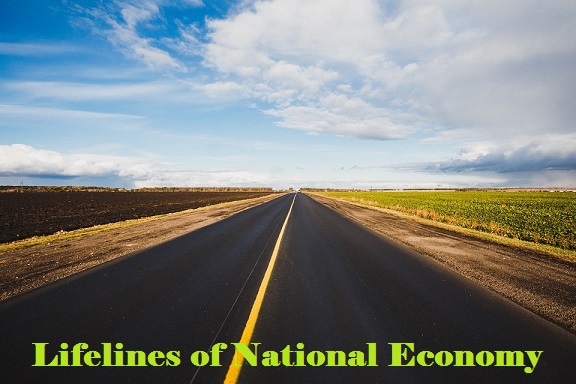 1) Multiple-choice questions
(i) Which two of the following extreme locations are connected
by the east-west corridor?
(a) Mumbai and Nagpur
(b) Silcher and Porbandar
(c) Mumbai and Kolkata
(d) Nagpur and Siliguri
ANSWER:- Silcher and Porbandar
(ii) Which mode of transportation reduces trans-shipment losses
and delays?
(a) Railways
(b) Roadways
(c) Pipeline
(d) Waterways
ANSWER:- Pipeline
(iii) Which one of the following states is not connected with the
H.V.J. pipeline?
(a) Madhya Pradesh
(b) Maharashtra
(c) Gujarat
(d) Uttar Pradesh
ANSWER:- Maharashtra
(iv) Which one of the following ports is the deepest land-locked
and well-protected port along with the east coast?
(a) Chennai
(b) Paradwip
(c) Tuticorin
(d) Vishakhapatnam
ANSWER:-Vishakhapatnam
(v) Which one of the following is the most important modes of
transportation in India?
(a) Pipeline
(b) Railways
(c) Roadways
(d) Airways
ANSWER:- Railways
(vi)  Which One of the following terms is used to
describe trade between two or more countries?
(a) Internal trade
(b) International trade
(c) External trade
(d) Local trade
ANSWER:- International trade
2) Answer the following questions in about 30 words.
(i) State any three merits of roadways.
(ii) Where and why is rail transport the most convenient means
of transportation?
(iii) What is the significance of the border roads?
(iv) What is meant by trade? What is the difference between
international and local trade?
ANSWER:- (i) Merits of roadways:
(a) They are cheaper than railways in terms of construction costs.
(b) Roads can go through dissected and undulating land areas and
through steep mountains.
(c) They are economical as loading costs are low and door-to-door
service can be availed of.
(ii) In the northern plains, rail transport is the most convenient mode of transportation. This is because this region has vast level lands that are good for laying tracks and huge population and high agricultural productivity, making rail transport a profitable venture.
(iii) Border roads are strategically important as they improve accessibility to areas like the northern and northeastern border areas which
have a difficult terrain.
(iv) Trade is the movement of goods and services between regions
for economic gain. Trade between two or more countries is termed as
international trade, while trade occurring in a region within the same country
is called local trade.
3. Answer the following questions in about 120 words.
(i) Why are the means of transportation and communication called
the lifelines of a nation and its economy?
(ii) Write a note on the changing nature of the international
trade in the last fifteen years.
ANSWER:- i)we are living in the age of communication, using the telephone, television, films and the Internet . Even books, magazines and newspapers are important means of communication. Various means of transport and communication have reduced distances, bringing the world closer. Modern life is so complex that one has to depend on others. The same is true of the countries as well. No country today can prosper without the cooperation and assistance of others. This requires the movement of goods and materials between countries. Trade provides us with our necessities and also adds to the amenities and comfort of our life. We may also notice that they are rightly called the lifelines of our national economy.
ii) The changing nature of the international trade for India, in the last fifteen years, has been impressive. Exchange of information and knowledge has
surpassed the exchange of goods and commodities. Through its advanced software knowledge and excellence in the field of information technology, India has emerged as a viable contender at the international level and is earning huge amounts of foreign exchange through the same. Tourism too has added to India’s upgraded position in international trade. In 2004, there was a 23.5% increase in foreign tourist arrivals as against the number in 2003. Thus, international trade for India has undergone a cognisable change in the past fifteen years.