1.     Mention different aspects of life in which women are
discriminated or    disadvantaged in India.
Answer:
– Some of the examples of
discrimination against women are as follows:
a)
The literacy rate among women is only 54 per cent compared with 76 per cent among men.
b)
Most of the labour done by them is unpaid. Where they are paid for their
work, they receive lesser wages than men.
c)
In India, parents prefer sons over daughters and find ways of aborting girl
child before she is born.
d)
Women are exploited and harassed at the workplace and at the home.
2.     State different forms of communal politics with one
example each.
Answer
:- Different forms of communal politics:
a)     Many people think of their religion as superior to all other religions. Such people often try to dominate the people from other communities.
b)
Communal violence riots and massacre. Communalism can be ugliest if it takes the shape of communal violence, riots and massacre.
c)     The use of religious symbols and leaders in politics to appeal to the voters. This technique is applied by many politicians to influence voters from the two largest religious communities in the country.
d)    A communal mind often leads to a quest for political dominance of religious community.
3.     State how caste inequalities are still continuing in
India.
Answer
:- caste inequalities have not completely disappeared from India.
a)     Economic inequalities exist on the basis of caste.
b)    Even today, most people marry within their own caste or
tribe.
c)     Untouchability has not ended completely despite
constitutional prohibition.
d)    Education is not easily available to the so called ‘low
castes’.
4.     State two reasons to say that caste alone cannot
determine election results in      India.
Answer:
– a) No party wins the votes of all the voters of a caste or community.
b) No parliamentary constituency in the country has a clear majority of one single caste.
5.     What is the status of women’s representation in India’s
legislative bodies? 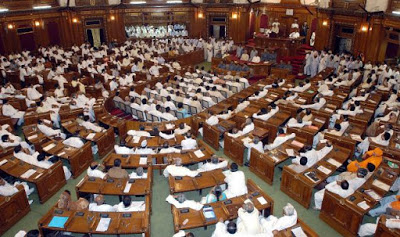 Answer
:- In India, the proportion of women in legislature is very low. Number of  women legislatures is not more than 10%. As one-third of seats in local government bodies      (panchayats and municipalities) are reserved for women, there are more than 10 lakh elected women   representatives in rural and urban local bodies.
6.     Mention any two constitutional provisions that make India
a secular state.
Answer
:- Two constitutional provisions that make India a secular state are-
a) Freedom to practice, profess and
propagate the religion of one’s choice.
b) There is no official religion for the
Indian state.
7. When we speak of gender divisions, we
usually refer to:
(a) Biological difference between men and
women
(b) Unequal roles assigned by the society
to men and women
(c) Unequal child sex ratio
(d) Absence of voting rights for women in
democracies
Answer
:- (b) Unequal roles assigned by the society
to men and women
8. In India seats are reserved for women in
(a) Lok Sabha
(b) State legislative assemblies
(c) Cabinets
(d) Panchayati Raj bodies
Answer
:- (d) Panchayati Raj bodies
9.
Consider the following statements on the meaning of communal politics. Communal
politics is based on the belief that:
A. One religion is superior to that of
others.
B.
People belonging to different religions can live together happily as equal citizens.
C. Followers of a particular religion
constitute one community.
D.
State power cannot be used to establish the domination of one religious group
over others.
Which of the statements is/are correct?
(a)   A, B, C, and D (b) A, B, and D (c) A and C (d) B and D
Answer:
– (c) A and C
10. Which
among the following statements about India’s Constitution is wrong? It
(a) Prohibits discrimination on grounds of
religion.
(b) Gives official status to one religion.
(c) Provides to all individuals freedom to
profess any religion.
(d) Ensures equality of citizens within
religious communities.
Answer:
– Gives official status to one religion.
11. Social divisions based on Caste are peculiar to India.
12. Match List I with List II and select the correct
answer using the codes given below the Lists:
Answer: –