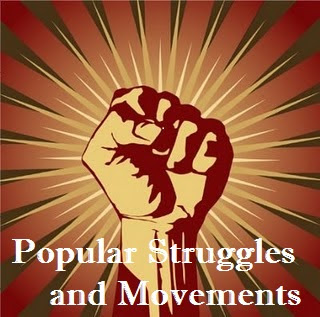 → They try to win public support and sympathy
for their goals and activities by carrying out information campaigns,
organising meetings, filing petitions etc.
→ By organising strikes and disruptions, they seek to make
the government take note of their demands.
→ The issues raised by them often influence the policies of
political parties.

→ They also influence decision-making by
lobbying.

→ Political parties sometimes grow out of
movements. Parties like DMK and AIADMK were formed this way.
→ They often take
positions that are opposed to each other. Yet they are in dialogue and
negotiation.

→ Many a times, the issues raised by pressure or
movement groups are taken up by political parties, leading to a change in the
policies of the parties.
3. Explain how the activities of pressure groups are
useful in the functioning of a democratic government.
Answer :- Pressure groups are
organisations that attempt to influence government politics. They do not
directly control or share political power. Pressure groups help in the deepening of democracy. As long as everyone
gets the opportunity, putting pressure on the rulers is not an
unhealthy activity in a democracy. Governments can often come under undue
pressure from a small group of rich and powerful people. Pressure groups
perform a useful role of countering this undue influence of reminding the
government of the needs and concerns of ordinary citizens.


4. What is a pressure group? Give a few examples.
Answer :- A pressure group is an organisation which attempts to influence government
policies through protests and demonstrations. Pressure groups are formed when
people with similar opinions get together for similar objectives.
Examples of pressure groups are FEDECOR and BAMCEF.
5. What is the difference between a pressure group and a political
party?
Answer :- A pressure group is an organisation formed when people with common
occupation, interest, aspirations or opinions come together in order to achieve
a common objective.. They fight and try to achieve a common objective. Political
parties contest elections because their aim is to achieve political power. They
have more than one interests, they have their own ideology. They represent
various interests and have their own way of achieving their aims.


9. Match List I with List II and select the correct
answer using the codes given below the lists:
Answer :-
10. Consider the following statements about pressure
groups and parties.
A. Pressure groups are organised expression of the
interests and views of specific social sections.
B. Pressure groups take positions on political issues.
C. All pressure groups are political parties.
Which of the statements given above are correct?
(a) A, B, and C (b) A and B (c) B and C (d) A and C
Answer :- (b) A and B