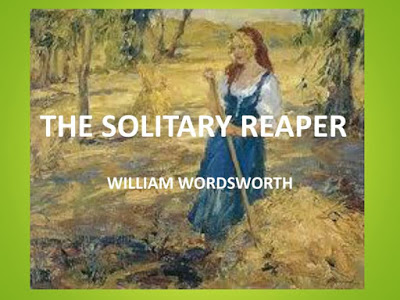 ·
At the outset the poet
tells us to look at a girl who is single in the field.

·
The word ‘Single’ and
‘Solitary’ makes us aware about the hushed
atmosphere of the valley.

·
She is simultaneously
singing and reaping.

Critics have evaluated the line
in different ways. Firstly – The
poet is so mesmerised with the effect of the Solitary
Reaper’s song that he could not decide whether to stop or gently pass.
Secondly – The
poet was elated by the song of the Solitary Reaper and did not want the song to
come to an end for him. If he stops or passes by, in both cases the girl might see
him and stop singing. So he was in confusion whether he would stop or gently
pass.


Thirdly– The
poet addresses to the passersby not to be reason of disturbance. He advises
them either to stop or pass gently (This seems impractical as the poet stated
already that the reaper was lonely and in secluded atmosphere)
Poetic
Devices in use: –
I)
Antitheses – “Stop here
or gently pass!”

Again we are acquainted with the loneliness of the Solitary
Reaper. She cuts and binds the grain alone and sings melancholy songs. Then the
poet urges us to listen and feel the effect of the song. According to the poet,
the whole valley is overfilled with the enchanting song of the Solitary Reaper.
Poetic Devices in use: –
I)
Inversion – alone she
cuts and binds the grain.
II)
Antithesis – cuts and
binds
III)
O listen! For the vale
profound – (Apostrophe)
IV)
O listen! for the vale
profound
Is
overflowing with the sound (Hyperbole, Enjambment)
Line
– 9-12

Line-13-16
After comparing the song of the Solitary Reaper with the
nightingale, Wordsworth goes on describing and comparing with cuckoo, another
acclaimed sweet singing bird. Wordsworth takes us to the Hebrides where the
silences of the remote islands are broken by the voice of the cuckoo bird.
At the same
time Wordsworth consciously states that the voice of the Solitary Reaper was a
thrilling one and he had never heard such a voice as this.
Poetic Devices in use: –
I)
Inversion – a voice so
thrilling never was heard.
II)
Metaphor – here the song
of the nightingale is compared to that of cuckoo.
III)
Hyperbole – Breaking the
silence of the seas.

Now Wordsworth goes on guessing what the song means. This is
to be kept in mind that the Solitary Reaper song in Erse (Local Gaelic Language). So Wordsworth had a little knowledge about
what was the theme of the song. He concluded the song to be a melancholic one. He
further guessed that the reason of the sad songs of the Solitary Reaper to be
the deceased kinsmen in the battle. The poet also hinted at “for old unhappy,
far-off things”. This part of the sentence may relate to natural disasters and
diseases which might have become the reason for the end of many lives.
Poetic Devices in use: –
I)
Nothing as such.

They the poet asserts the song to be an ordinary song. The
reason of the song did have any special reason. He opined that the song was
nothing but an ordinary one. And the reason of the song is based on day to-day
issues that we generally face. These sad incidents were existing before hand
and still those prevails and will be found in future too. It could be related
to natural deaths in family and friends; loss of near and dear ones; separation
between the loved ones etc.
Poetic Devices in use: –
I)
Nothing as such.
Lines-25-28

At this point Wordsworth quits guessing the theme of the
song. He was so exhilarated by the melody of the song; he felt as if the song
with never end. Again the poet reminds us how she sang the song while bending
over sickle. He was completely engrossed with the song. He was motionless and
still as the song had captured his basic consciousness. The effect of the song
was such that it was the indelible one. He bore
the music in his heart and carried it as treasure. Wordsworth admits in the
concluding line that such music was never heard by him again thus acclaiming it
to be a heavenly one.

ALSO READ- THE SOLITARY REAPER TEXT BOOK ANSWERS AND SOLUTIONS CBSE – CLASS – IX – ENGLISH
Poetic Devices in use: –
I)
Alliteration – ‘the
theme’.
II)
Inversion – “ and over
the sickle bending”
III)
Tautology – “I listened
, motionless and still”
IV)
Inversion – “the music
in my heart I bore”
Inversion – “Long after it was heard no more.”