WHO DID PATRICK’S HOMEWORK

a) What did Patrick think his cat was playing with? What was it really?

Ans: Patrick mistook his cat to be playing with a doll. At first, he thought so as the thing Patrick was playing with was looking like a doll. But it was not so. In reality, it was a very small man or elf.

b) Why did the little man grant a wish?

c) What was Patrick’s wish?

Ans: Patrick never liked studies. He considered studies to be boring. He disliked home works. When the little man offered him a wish, Patrick thought of nothing but his homework. He wished to the elf to do all his home works.

d) In what subject did the little man need help to do Patrick’s homework?

Ans: Hardly there was any subject where the little man did not require any help. To find out a meaning he ordered Patrick to bring the dictionary. He took full help from Patrick in English, Maths and History. And while helping the little man, Patrick himself learnt everything.

5. How did Patrick help him?

Ans: The elf had promised Patrick to do all his homework. But the elf knew very little about the subjects Patrick studied. Whenever the elf required to know the meaning of any word, he would order Patrick to read the meaning out from the dictionary. He would help the elf solving the sums. And even he would read out the portions from History to the elf.

6. Who do you think did Patrick’s homework, the little man, or Patrick himself? Give reasons for your answer.

Ans: Though Patrick himself knew that the homework was done by the elf, the real truth was that everything was done by Patrick himself. The elf did not know anything about Patrick’s subjects. Patrick himself stayed up the nights, worked hard and got the As. Teachers, parents and all others were surprised at this and Patrick turned out to be the model kid.

A. Fill in the blanks in the sentences below with the words or phrases from the box. (You may not know the meaning of all the words. Look such words up in a dictionary, or ask your teacher.)

( out of luck, mystery, true to his word, chores, semester, between you and me, lookup)

Ans -between you and me 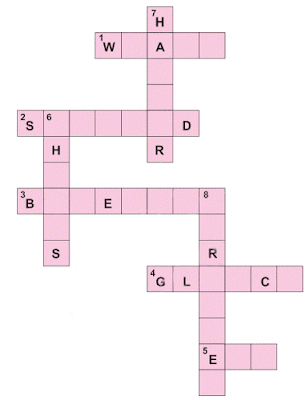 B. Use the clues given below to complete this crossword puzzle.

2. had an angry look on the face

4. a fault in a machine that prevents it from working properly

5. a small and naughty boy-fairy

6. work that must be done every day, often boring 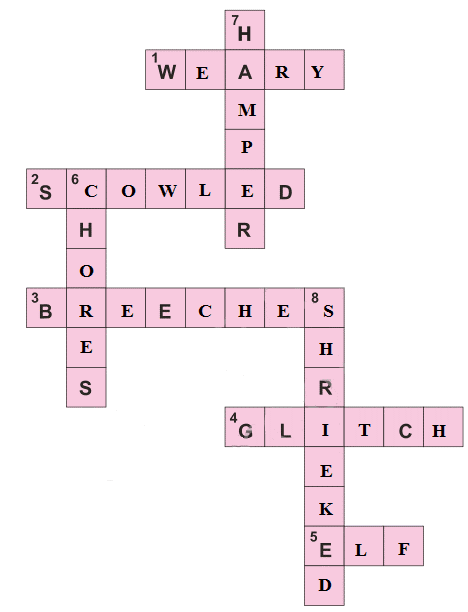 ADVANCE PREPARATIONS FOR THE CHAPTER

16.   Fists- a person’s hands when the fingers are bent in towards the palm tightly

18.   Scowled- his face had these expressions, showing disgust, anger and disapproval.

22.   Glitch-(an informal word) a fault in a machine that prevents it from working properly; here hitch or problem.

23.   Elf- a supernatural creature of the folk tales.

26.   Mystery- something that is difficult or impossible to understand.

27.   Nag- one who troubles someone all the time by asking or doing something.

30.   Bleary-looking or feeling dull from sleep, or tiredness.

1.      What did Patrick think about homework before meeting the elf?

2.      What did Patrick do instead of doing homework before meeting the elf?

3.      What was the teacher’s attitude towards Patrick before meeting the elf?

10.   How did the elf manage to do Patrick’s homework at the beginning?

16.   What were the reactions of others over Patrick’s result?

17.   What do you think who did Patrick’s Homework?

1.      What did Patrick think about homework before meeting the elf?

Ans- Patrick did not like studies at all. He hated doing homework. So he never did any homework. He considered homework to be a very boring thing. Instead, he liked playing games.

2.      What did Patrick do instead of doing homework before meeting the elf?

3.      What were the teacher’s attitude towards Patrick before meeting the elf?

Answer- Patrick disliked studies and especially homework. Instead, he enjoyed spending time playing different games. As a result, he never performed properly in his examinations. Teachers were not happy on Patrick. They advised him to do his homework properly and regularly or he would not learn anything.

Answer- Patrick was a student who never liked studies and homework. Instead he liked playing different games like Hockey, Basketball and Nintendo. As a result he remained a poor student in the class. He learned nothing about different subjects. As he was ignorant about everything, he considered himself to be an ignoramus.

Answer- One day Patrick found that his dog was playing with a little doll and he grabbed it away. But when Patrick noticed carefully, he discovered with surprise that it was not a doll but a man of the tiniest size.

Answer- The elf was of the tiniest size .He looked similar to a doll. He had put on a little wool Shirt with old fashioned britches and he had put on a high tall hat like the witch’s.

Answer- When Patrick discovered that his cat was not playing with a doll rather it was an elf of the tiniest size, he was surprised. He was amazed when he heard the elf talking .The elf yelled and requested Patrick to save him from the cat. And if Patrick does so, he would grant him a wish. Considering this to be solution to all his troubles, Patrick saved the life of the elf.

Answer- When Patrick was offered a wish for saving the elf’s life, Patrick thought to bring an end to his trouble of studies. He wished that the elf should do  all his home works till the end of the Semester that was 35 days .Patrick thought that in this way he would probably manage to get all A’s in the examinations.

Answer- In reality the elf had little knowledge about studies. When he heard the wish of Patrick, his face wrinkled like a dishcloth thrown in a hamper. He kicked his legs, doubled his fists, grimaced and scowled and then pursing his lips he said, “Oh am I cursed! But I’ll do it.”

10.  How did the elf manage to do Patrick’s homework at the beginning?

Answer- To keep his word the elf started doing Patrick’s homework. But there was a problem in the elf’s way of doing homework. He did not know what to do and so he needed help in every work to do it properly. He would shout “Help me! Help me!” And Patrick had to come to help him to do his homework.

11.  What happens when the elf does not know a word?

Answer- The elf knew nothing about Maths and History. So Patrick was out of luck. The elf rather asked, “What are time tables?” He said that elves never needed a time table. He even did not know anything about addition, subtraction, division and fractions. Then he would say Patrick to sit and guide him.

When the elf was given the home work on History, elves said that elves knew nothing about human history, to them it was mystery. Then he would shout and order Patrick to go to the library, bring more and more books and read those to him.

Answer- As the elf did not know as how to do homework for Patrick, he disturbed Patrick continuously for everything. As a result Patrick was made to work harder than ever and it was really dull and uninteresting for him. The elf made him to stay up to nights to help him study. Patrick was weary and he went to school with eyes puffed and bleary.

Answer- As per the agreement between the elf and Patrick, the elf had to the home work of Patrick till the end of the Semester for 35 days. As the duration of the 35 days was over and the last day of the school arrived and no homework was left, the elf slyly and quietly slipped out the back door.

Answer- At the end of the Semester, results were out. Patrick got A’s in all his subjects .All were amazed and surprised by his result.

16.  What were the reactions of others over Patrick’s result?

Answer- When the results were out, his classmates were amazed; his teachers smiled and were full of praise. His parents wondered what had happened to Patrick. Patrick was now the model kid. He cleaned his room, did his chores, and was cheerful, never rude, like he had developed a whole new attitude.

17.  What do you think who did Patrick’s Homework?

Answer- Patrick thought that all his home works were done by the elf. But in reality the elf made Patrick do all his homework and all his studies .Patrick studied hard day and night prepared his lessons and to everybody’s surprise secured A’s in all the subjects.